Leo Messi and Rodrigo De Paul FaceTimed their friends from the Maracana Stadium after Argentina’s Copa America win, while Lautaro Martinez seemed to mock Brazil with an offensive comment.

Argentina won their first major trophy in 28 years beating Brazil in the Copa America Final at the Maracana Stadium.

Rodrigo De Paul delivered the assist for Angel Di Maria’s winner in the first half, allowing Argentina’s captain Leo Messi to lift the first piece of silverware with his national team. 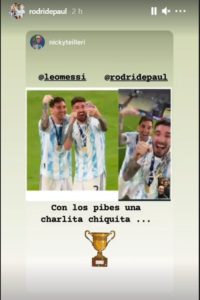 Messi, who has yet to sign a contract extension with Barcelona, FaceTimed some of his friends along with Rodrigo De Paul who, from next season, could be one of his opponents in La Liga as the Udinese midfielder seems to be on the verge of joining Atletico Madrid.

The pictures of Messi and De Paul’s video calls were posted on Instagram by their friends and shared on their stories by the Argentinean stars.

Lautaro Martinez won his second trophy this season after the Serie A title with Inter.

The Argentinean striker aimed a big at Brazil, posting a picture with the trophy with what appears to be an offensive comment.

“We are going to bring the cup to Argentina, the cup lost by Brazucas,” wrote the 23-year-old.

Generally, ‘Brazucas’ is a term used to refer to female sex workers in Brazil. 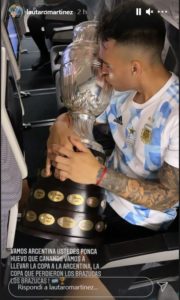 Atalanta could get both Abraham…

Vlahovic and Dzeko to replace…