Bologna, Fiorentina Inter, Juventus and Napoli have arranged a private jet charter to let their South American players return to Italy for the upcoming Serie A fixtures, but not everybody may return in time.

Some of them have teamed up to organize a charter private jet for their players to return in time for their league games this weekend.

According to La Gazzetta dello Sport, Bologna, Fiorentina Inter, Juventus, Napoli, Eintracht Frankfurt, Feyenoord, Genk and Porto have booked a private jet to let their international players return to Europe after Colombia vs. Chile, which will be played tonight at 1 am (midnight in the UK) in Barranquilla.

The plane will land in Paris on Friday afternoon, and the players will return to their clubs from the French capital with different flights. Juan Cuadrado and David Ospina will travel together from South America to France and meet the following day again at the Stadio Maradona for Napoli vs. Juventus.

According to La Gazzetta dello Sport, Brazil international Alex Sandro and Danilo may arrive in Italy from Brazil when Napoli vs. Juventus kicks off on Saturday.

The Seleçao face Peru at 2.30 am Italy time on Friday. The duo will travel from Recife to Sao Paulo, then to Paris and then to Turin when they are expected to land on Saturday afternoon, more or less when their Juventus teammates take to the pitch against Napoli in South Italy. 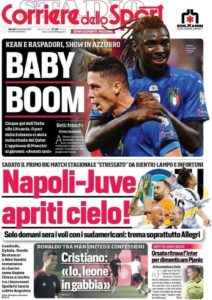 However, according to Il Corriere dello Sport, the Brazilian duo could fly straight to Paris from Recife and arrive in Italy on Friday evening.

The Argentineans seem to have the easiest path. Lionel Scaloni’s side face Bolivia at 1.30 (Italy time) tonight. They will then fly straight to Madrid, where they are expected to land at noon on Friday.

From the Spanish capital, they will reach their different destinations. There are as many as eight Argentinean players expected to play over the weekend in Serie A: Juan Musso (Atalanta),  Nicolas Dominguez (Bologna), Nico Gonzalez and Martinez Quarta (Argentina), Joaquin Correa and Lautaro Martinez (Inter), Paulo Dybala (Juventus) and Nahuel Molina (Udinese).