Donnarumma left Milan at the end of his contract in June, signing a contract until 2026 with PSG.

However, his time in Paris didn’t start in the best way as he was relegated to the bench in the first two Ligue 1 games of the season.

Milan replaced Donnarumma with Mike Maignan, but it seems that some Rossoneri fans haven’t forgotten the 22-year-old who played a key role in helping Italy win UEFA Euro 2020.

Donnarumma and Messi on PSG bench

On Sunday, a group of ultras unveiled two banners outside Milanello, before the Rossoneri’s game against Cagliari.

‘We don’t forget traitors, be careful when you will be back in Milan,’ they wrote in one of those, while the second one read: “Donnarumma ungrateful bast… you suck more than Leonardo.’

Donnarumma made his senior Milan debut at 16 and made 251 appearances with the Serie A giants. 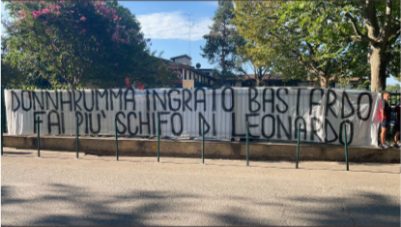 Conte and Pirlo alternatives for…

Vlahovic: ‘I stayed for Italiano,…

Inter have the key to…

Report: Kjaer aims to be…