Italy won the Euros after a legendary Final against England at Wembley Stadium and Richard Hall looks at how each player performed during the tournament.

Gigi Donnarumma 10 – The Italian custodian show once again that he is an elite goalkeeper despite being only 22 years of age. His performance against Spain saw him break down in tears after he saved the key penalty. The goalkeeper is not perfect, but he secured his tag as the successor to the great Gigi Buffon. Named player of the tournament.

Salvatore Sirigu 6 – He has a brief spell between the sticks after Italy had qualified and did nothing wrong. Donnarumma praised Sirigu for his advice before the penalty shootout against Spain, showing that you can contribute whilst on the bench.

Alex Meret – NA Did not play

Giovanni Di Lorenzo 7 – If you asked anybody what Di Lorenzo’s highlights of the tournament were, you may be waiting for some time. However, he was Italy’s Mr consistent and dropped in well when the Azzurri moved to a back three. He allowed the left-hand side to push up and did his job well.

Giorgio Chiellini 9 – Potentially Italy’s player of the tournament. The intelligence exhibited by the captain was immense. His ability to move quick players out wide whilst repositioning himself was the work of a master craftsman. A leader by example, he was simply superb to watch and his antics before the penalty shootout against Spain will go down in history.

Leonardo Spinazzola 9 – It was interesting to hear people who do not watch Serie A, referring to Spinazzola as Italy’s best player. Nobody was raving about him to these levels at the end of last season, but this was his tournament. The peninsula was devastated when he fell foul of his injury but his contribution will not be forgotten.

Emerson 8 – Emerson was initially criticised when deputising for Spinazzola as he was not at that level but it soon became clear he offered a different threat. Yes, he holds onto the ball too much, but his dynamic runs still offered a different attacking element from the left and he did his job well.

Francesco Acerbi 7 – For those who follow Serie A they will understand the quote that ‘Francesco Acerbi was Francesco Acerbi.’ Professional to the letter and did not put a foot wrong when asked. He was the perfect substitute and one of Mancini’s soldiers.

Leonardo Bonucci 8 – What can you say about Bonucci that has not already been said. His leadership and understanding with Chiellini are why Italy did so well in the competition. He did himself proud in his final hurrah and will go down in history, as one of Italy’s greatest defenders.

Alessandro Bastoni 7- With only 90 minutes under his belt it is impossible to really judge him. His passing accuracy was at 96% in his one game and he at least demonstrated why he will be the heart of Italy’s defence for years to come.

Alessandro Florenzi 6 – Injury took its toll on the 30-year-old and the 30 minutes he played are simply not enough to judge.

Rafael Toloi 6 – The Atalanta centre-back offered experience and did nothing wrong as such. Superb at club level he did not make this evident on the international stage with a low passing average. Giving the ball away, this much nearly cost the Azzurri. 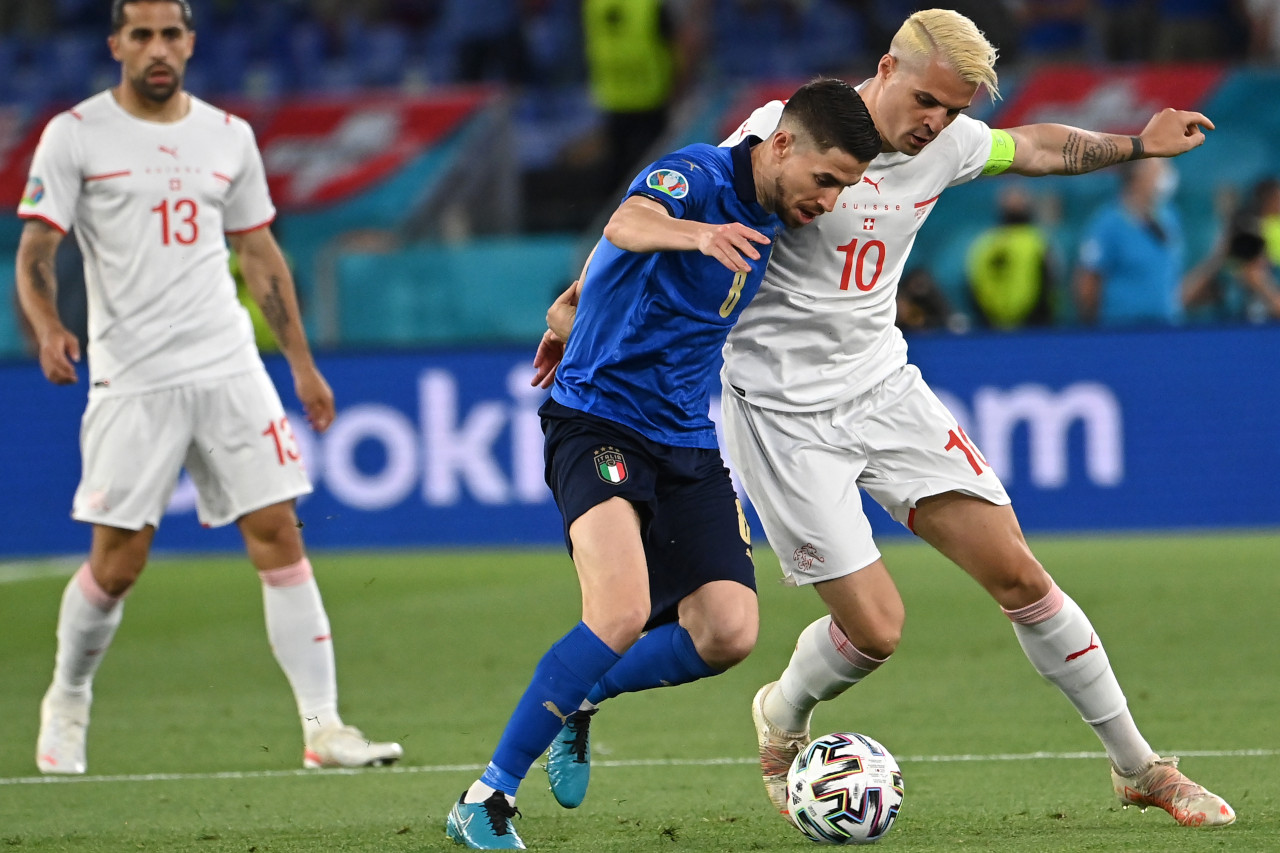 Manuel Locatelli 8 – He would get that rating just for the celebration. The Sassuolo midfielder deputised for the injured Verratti and how! There was a clamour for him to start with two goals to his name, but he can relax knowing the big teams in Europe are sniffing around him.

Marco Verratti 8- After his injury, his experience and tactical intelligence meant that it was obvious that he should start. There was a confidence that he brought to the team, it was like having your bishop back on the chessboard. His relationship with Jorginho transformed the Italians into an elite team.

Gaetano Castrovilli N/A – Three minutes played and nothing to report.

Jorginho 9 – The fact that people are talking about him winning the Ballon D’Or says it all. He simply was the lynchpin in this Italian side, the metronome and the battery. His range of passing is at a level that is in the shadows of Pirlo and he has been critical to the functionality of this Italian squad

Matteo Pessina 8 – With two goals, the Atalanta midfielder has impressed when called upon. So much so that Roberto Mancini will no doubt hold him in high regard and use him heavily in the World Cup qualification stages. His composure and intelligence have made him an asset for Italy and a big player for the future.

Nicolo Barella 9 – Nicolo Barella has topped off his Scudetto win with Inter by introducing himself to the international stage with consummate ease. Potentially a world-class individual, he has helped dominate his countries midfield with endeavour, class and technical brilliance. He has been a difference-maker and has a huge future ahead of him.

Federico Chiesa 9 – The season started slowly but has culminated in a bang. Chiesa has shown just what a creative force he is and he has shown the world he also has an end product. His father Enrico, must be proud as he watches his son surpass his own extraordinary talent.

Federico Bernardeschi 6 – The Juventus wide man has been used three times off the bench but has not managed to make an impact as yet. He was responsible for a perfectly executed penalty in the shootout against Spain. 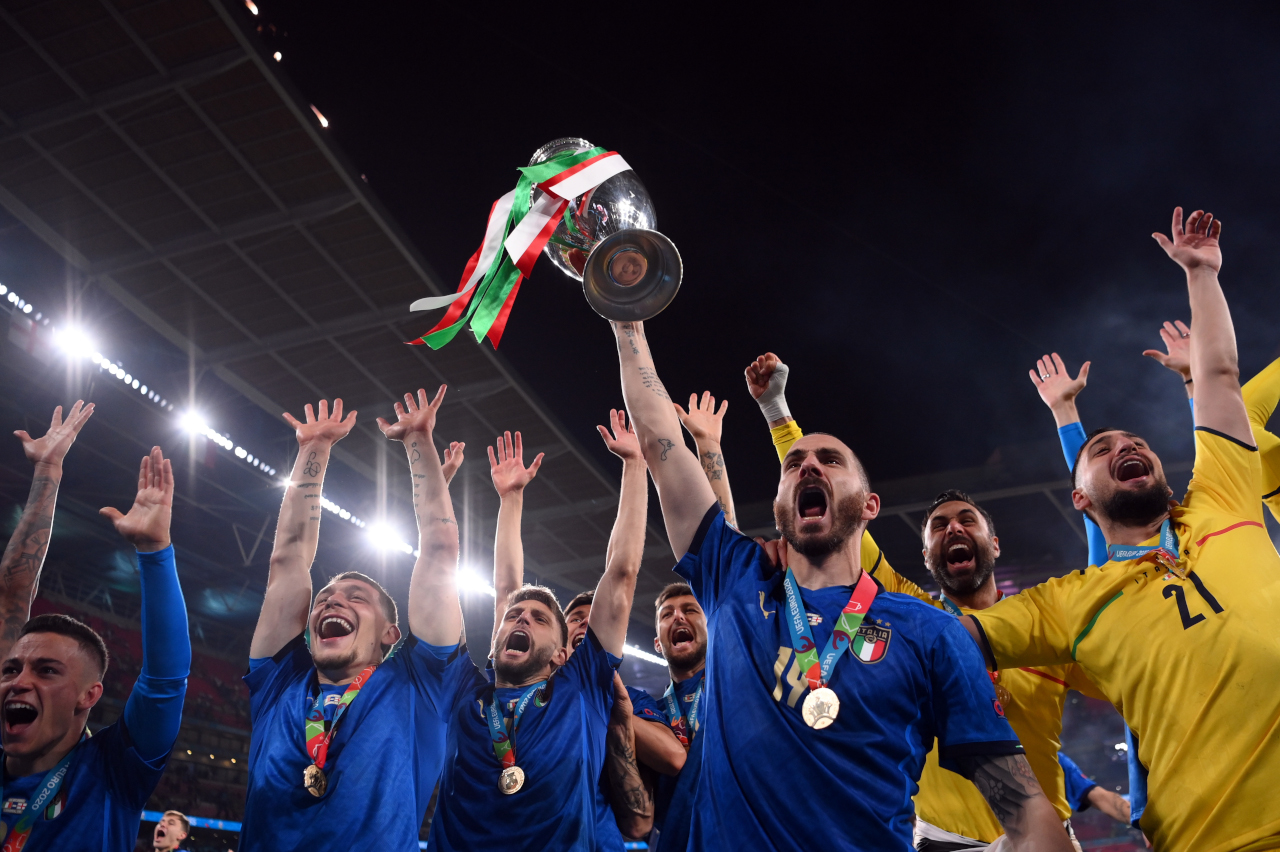 Ciro Immobile 7 – If you spend your time perusing the Gazzetta Dello Sport you would think that the Lazio striker has had a poor tournament. His two goals in five games may not have been as many as Italy wanted, but he offered pace on the counter-attack and Mancini was loathed to drop him.

Domenico Berardi 7 – Berardi is known in Italy as Mr inconsistent but his performances for Mancini and Italy have been at a good level. He hasn’t set the tournament alight, but he has provided a threat on the flanks and has done himself proud.

Andrea Belotti 7 – There have been calls for the 27-year-old Torino striker to play more in the tournament because of how well he holds the ball up. Perhaps a victim of Italy’s opposition has played second fiddle to Immobile but has done nothing wrong when called upon.

Giacomo Raspadori N/A – Featured for 15 minutes. Not quite the ‘Toto’ Schillaci love story everyone hoped for but good experience for the Sassuolo forward.

Lorenzo Insigne 9 – One of the highlights of Italy’s team. Languid, creative and beautiful to watch. He always played with a smile on his face. It is very difficult not to enjoy Lorenzo and his superlative Neapolitan street football.

Who is Manchester United-Atalanta referee…