Zlatan Ibrahimovic sent a message to Gigio Donnarumma after Italy’s EURO 2020 win and congratulated Italy: ‘My second home, not bad to play in Serie A.’

The Azzurri beat England on penalties at Wembley Stadium, becoming European champions for the second time in their history. 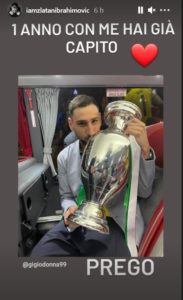 “Not bad to play in Serie A, my second home. Congrats, Italy,” the Milan striker wrote in an Instagram story.

The following story was dedicated to his former teammate Gigio Donnarumma who is set to join PSG as a free agent.

“After one year with me, you have already understood. You are welcome,” wrote Ibra, sharing the picture of Donnarumma holding the trophy.

The 22-year-old goalkeeper saved one penalty kick in the shootout against Spain in the semi-finals and two more in the Final against England. He was named Player of the Tournament and PSG will soon announce his signing.

Donnarumma and Ibrahimovic share the same agent: Mino Raiola. The goalkeeper left Milan at the end of his contract on June 30 and underwent his medicals with the Ligue 1 giants in Rome on June 21.

Mkhitaryan: Roma will do everything…