Home / Premier League / Paul Gascoigne reveals ‘biggest regret’ of his career and story about his hilarious ‘new teeth’ and ‘chatting up’ Ally McCoist at Rangers!

It may be 23 years since Paul Gascoigne left Rangers, but his abrupt exit from the club still remains the ‘biggest regret’ of his football career.

Gascoigne’s larger-than-life personality made him a popular figure on and off the field, while he was adored by the Rangers faithful.

Gazza had a hugely successful three-year stint at the club winning two league titles, a Scottish Cup and a League Cup.

But speaking in a new exclusive talkSPORT McCoist & Gazza documentary, the former England midfielder opened up on his dramatic departure from Ibrox in March 1998 – having been beset by injuries and poor form.

Rangers’ dream of becoming the first Scottish side to win 10 successive league titles – ’10-in-a-row’ – fell apart after and it’s something which still haunts Gazza to this day.

“People ask me what’s my biggest regret football wise and it’s leaving Rangers at the time I did,” he explained.

“I was told [manager Dick] Advocaat wasn’t the right man for me. I didn’t know whether to play for him or drink him.”

Recalling the brilliant story of him joining ‘Rangers’ from Lazio in 1995 for £4.3million, Gazza said: “I remember speaking to [then Lazio boss] Dino Zoff and asking him what clubs were interested in me at the time and he said Chelsea.

“I said ‘I ain’t going there, what’s the other one?’ He replied Aston Villa.

“And I said I ain’t going there either, and then he said Rangers. so I’m walking out of the door and I turned around and said ‘I ain’t going to Queens Park Rangers’.

“No, Glasgow Rangers.” This stopped him in his tracks. “I slammed the door and said to Dino get them over quickly.

“I remember [Rangers manager] Walter Smith turning up and going ‘let me tell you about the club’.

“I went ‘no, let me tell you what I’ve got in the fridge…. and I came out with two Budweisers. He said ‘you’re signing, aren’t you?!’”

Gazza then explained to McCoist he was buzzing after the meeting and recalled the scenes at Ibrox when the supporters turned up to greet their superstar signing.

Just like thousands of England fans, who in 2002 imitated David Beckham’s blonde mohawk, an entire fanbase seemed to dye their hair in honour of Gazza.

“I remember meeting the chairman upstairs at the ground and he said ‘have you seen outside?’ I said, ‘no, why?’ ‘Have a look outside’.

“I just looked outside and saw all the fans. My hair was blonde, all of theirs was yellow – bless them. That was fantastic.

And one day at Rangers, Gazza quite literally brightened the dressing room with a new set of teeth.

“I know I’m quite fun in the dressing room, but one of the funniest things I’ve seen is when I got my teeth done,” the 54-year-old said.

“I said to the girl at reception, ‘do you think the guys will recognise?’ and she said ‘I shouldn’t think so!’

“As soon as I walked in the dressing room you [McCoist] went ‘wow, you can eat an apple through a letterbox’. That just ruined us, man.

The rapport he struck up with McCoist during his Rangers days was a beautiful sight to see, with the pair still firm friends to this day.

And recalling his version of Gazza’s new Colgate smile, Gers legend McCoist added: “I will never forget you walking into the dressing room, throwing your bag down and smiling at everybody with your new teeth, man.

“It was the funniest thing I’ve ever seen in my life, man.

“You and I organised a wee table for two in the dressing room. It was an imaginary wine bar.

“And then you come in and chat me up with your new teeth… it was ridiculous!”

At Rangers, Gazza found himself in a team winning trophies on a regular basis ,with a solitary FA Cup winners medal with Tottenham in 1991 to his name, though he ended the final in hospital with a knee injury.

Recalling the glory days at Rangers, which eventually saw the Scottish giants equal arch rivals Celtic’s nine-in-a-row, Gazza said: “I’d never won anything in my life, I’d received personal accolades but as a team and a squad I hadn’t won anything. 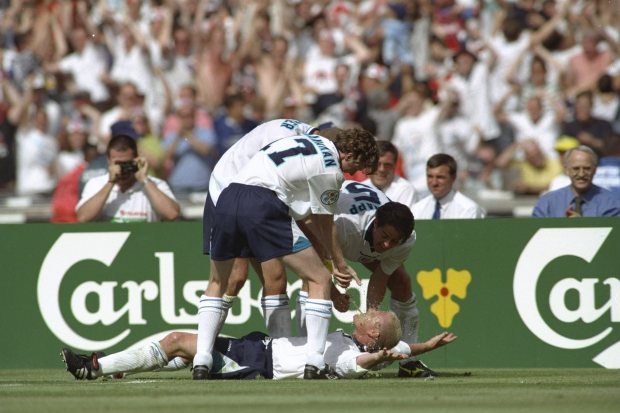 McCoist has heard the gags and stories before, but it didn’t stop him from crying tears of laughter

“What do you call a Scotsman in the second round of the World Cup? Ref!”

Regarding Gareth Southgate being England manager despite him missing the crucial penalty in the Euro ’96 shoot-out against Germany after Gascoigne scored his. “I want my country to tell me what I’ve done wrong. I told Gareth that and he just laughed.”

Unable to sleep on the eve of the semi-final against Germany, Gazza ended up in a late-night tennis match against two men he had just met. “I was sweating like mad and heard, ‘Gascoigne!’ It was the manager. I dropped the racket and ran back to the room.”

“When we went 1-0 down [to Aberdeen], I just thought to myself please God we’ve got to win this – it doesn’t matter who scores.

“I remember getting the ball on the edge of the box and how I’ve hit the ball into the roof of the net I don’t know.”

Gazza went on to score a sublime hat-trick as Rangers secured an eighth successive title in the 1995/96 season with a 3-1 victory over The Dons.

Describing the feeling of winning the league for the first time, he recalled: “I’d never felt… I’m dead emotional now… I’d never felt like that in my life before then.”

talkSPORT brings you a brilliant exclusive, as we bring McCoist & Gazza back together again from 7pm on Tuesday 8 June

Ally McCoist spends an hour in conversation with his former Rangers team-mate, and opponent at Euro ’96, Paul Gascoigne as they look back on their careers for club and country.

England vs Germany is confirmed…

England ‘should not fear’ Germany…