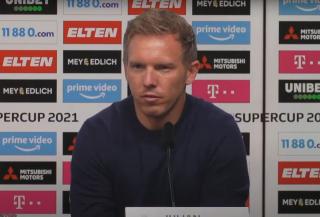 There were many newsworthy quotes from FC Bayern München actors as the record champions sorted through the wreckage of Friday’s upset loss.

Trainer Julian Nagelsmann declared that he was “for the first time as Bayern head-coach, genuinely pissed”. Team Talisman Thomas Müller called the loss “a bitter setback for our team identity”. Captain Manuel Neuer railed that the attack “displayed too little courage.”

Despite all of these strong words, Nagelsmann made clear that he didn’t want the blame for the loss to be pinned on Joshua Kimmich’s replacement in midfield.

Stuttgart hold off Mainz to…

Trio in line to return…

Mixed feelings for Glasner after…

Oxford to be out for…