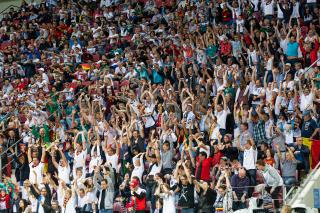 Third division side 1. FC Kaiserslautern announced on Tuesday that they had received approval from the city for an additional 5,000 spectators for Friday’s Pokal fixture against Frankfurt.

The Bertzenberg will thus play host to a stately crowd of 20,000; one of the largest German football audiences since the onset of the pandemic.

Rose confirms Brandt will be…

Gerard Seoane: ‘The game was…